This blog will help you to run your own SAP NetWeaver 7.51 ABAP instance inside a Docker container. This work was inspired by the Dockerfile created by Gregor Wolf and hosted at bitbucket.

Another differentiation is that you can “easily” change the Dockerfile to install NetWeaver 7.50 of the developer edition.

To be able to run the Dockerfile, you need

From my GitHub repository, you can find a Dockerfile that helps you to create a Docker image and container that will install your downloaded NetWeaver version. All you need is the Dockerfile, so a simple download is sufficient. You can also download the file by cloning the GitHub repository: https://github.com/tobiashofmann/sap-nw-abap-docker 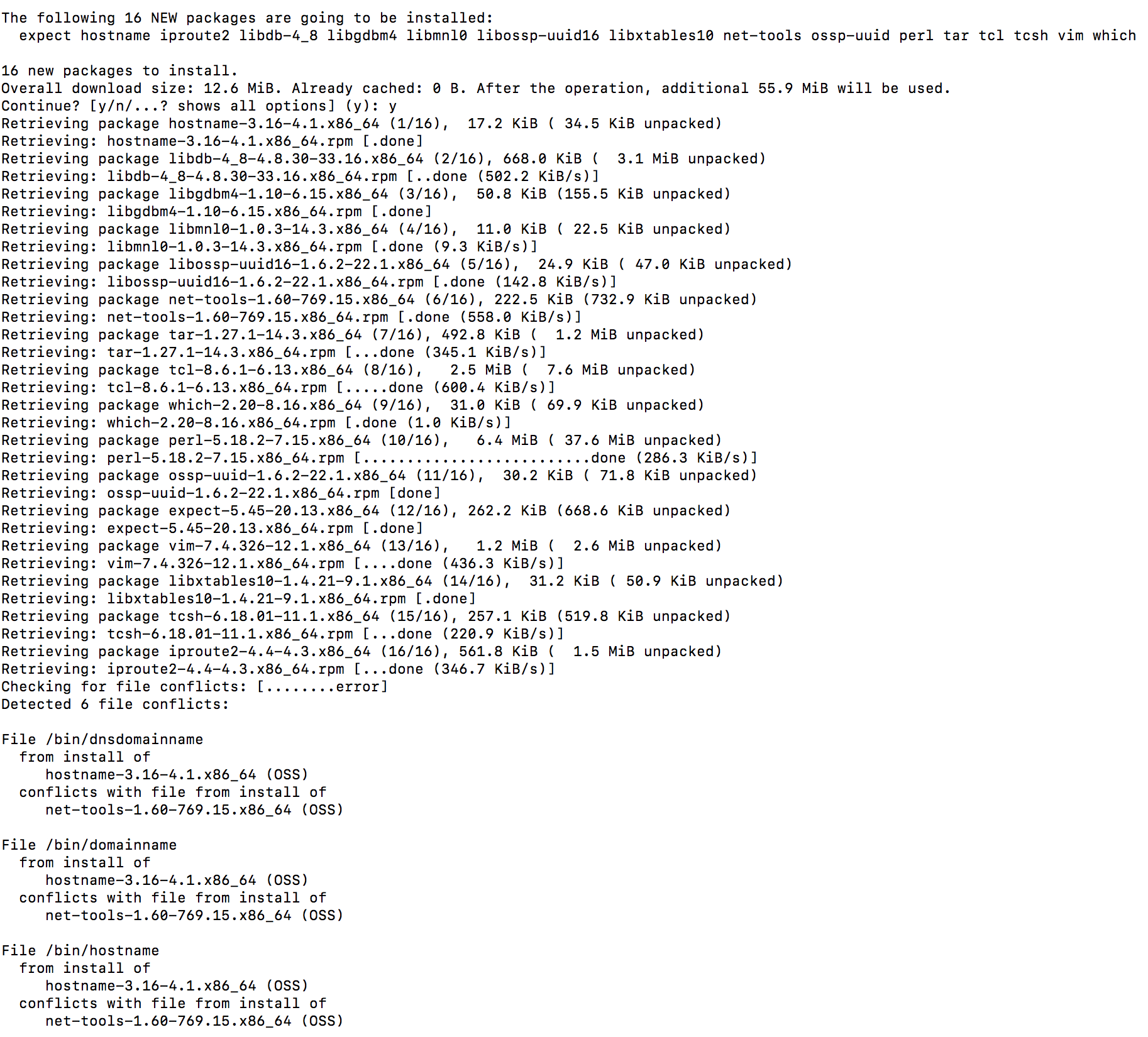 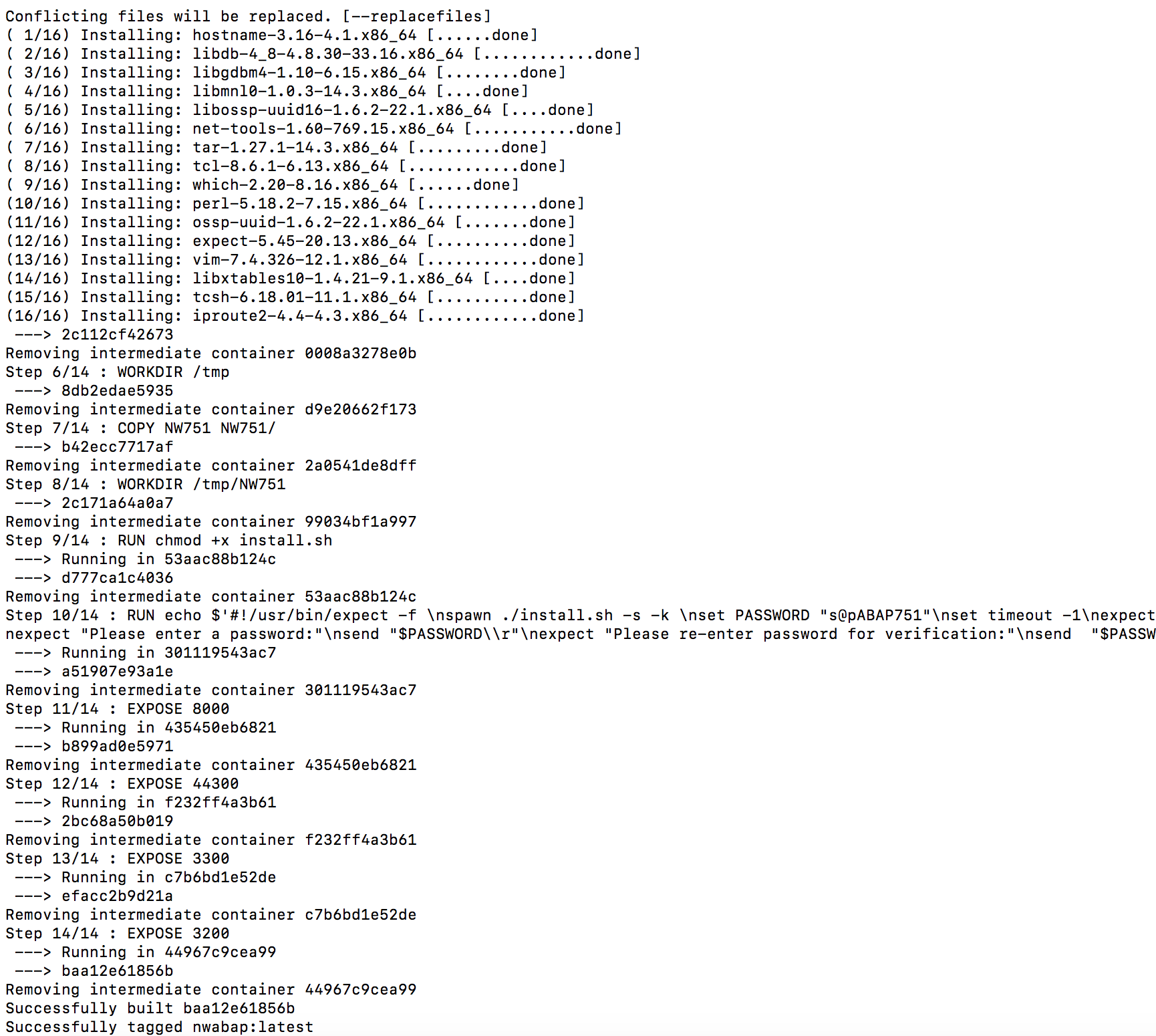 After the build is finished, the last line you should see is

To see the ID and name of the newly created image, run the following command:

The command lists the ID, tag and size of the image. As you can see, it’s a 15 GB Docker image. Using this image, you can start a container and install NW ABAP 7.51 DE inside the container.

You can now create a container from the image. You’ll have to connect to the container and run the installation script run.sh. The file was created during docker build. It will run SAP’s install.sh and fill in the input automatically.

This will start the container and log you in. What you’ll get is the bash shell.

In case you have Kitematic installed, you can see the running container listed. 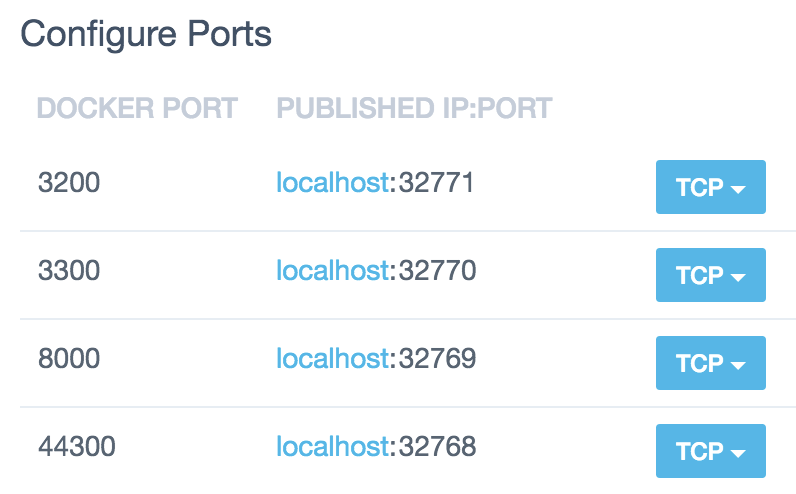 Run the script run.sh to install SAP NetWeaver ABAP 7.51. The script will enter all information requested by install.sh automatically. The installation will take some time, +/- 20 minutes. 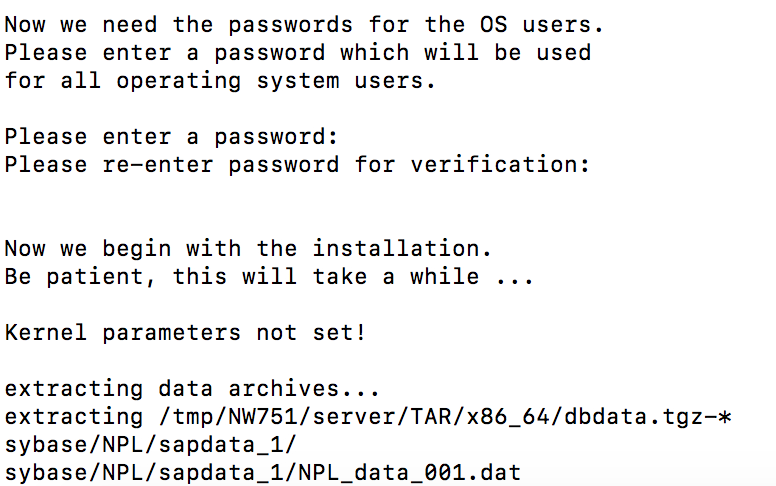 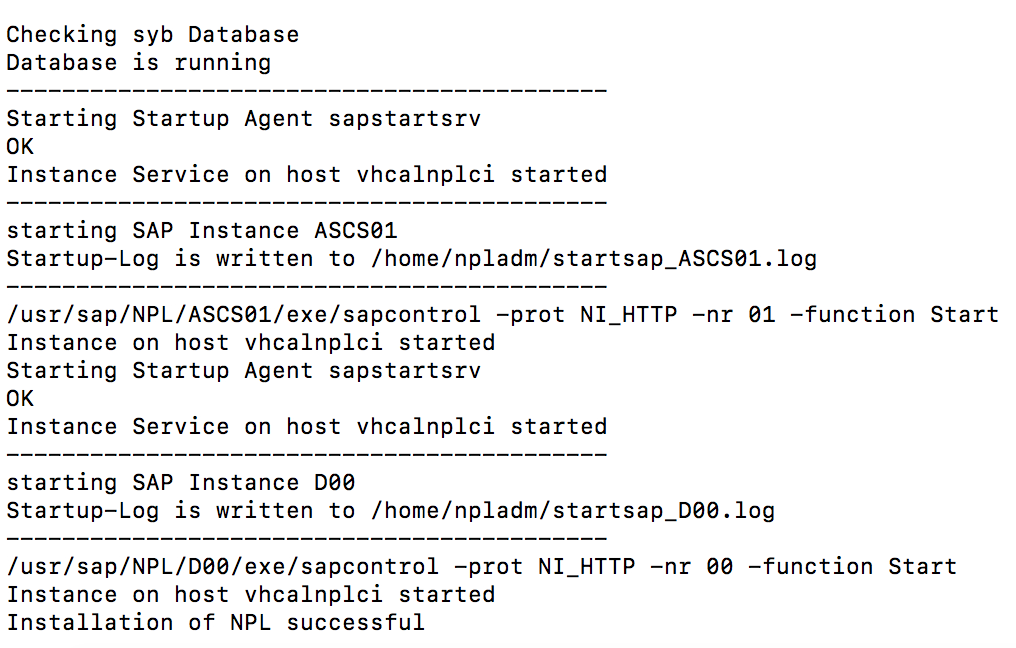 The installation worked when the script ends and you can see the output:

Hi Gregor.
I am using the docker file and it works great. Lovely way to easily get tour hand on a dev sap system.
However I get the daemon dump mentioned in the issues in github. After you’ve created the image, is it then too late to add the daemon service?

with daemon dump you mean the UUID daemon that causes the transactions to crash? In the Dockerfile the UUIDD service is started. A simple /usr/sbin/uuidd should start the service.

It may look silly, but this is how Docker works. If you do not specify the port mapping during container startup, Docker assigns a random port. The assigned port can be taken from Kitematic. If you do not want to use a random port, just specify one. Than you can use port 3200.

In Windows SAPGUI you specify the port with host name. in Java GUI you use connection string.

my fault, I missed the bit about port mapping and thought I needed an external proxy on top of docker (which did sound silly 🙂 )

anyway, my problem was that standard SAPGUI and similar only works with ports 32xx, and the solution is obvious 🙂

Hi Tobias Hofmann,
Its a great blog.I followed your blog to install SAP WEBDISPATCHER in Docker.
Now the Docker Container is up and Webdispatcher instance is created but the webdispatcher is not starting,as dont have any backend system to be choose as Message server.
So,can I connect a SAP System from other other network to this my container? Or should I have to install SAP System on Docker and use it as a backend system, but it is going to use,huge memory.
Please suggest.

For the WD to be able to connect to another docker container, you’ll have to take a look into Docker networking. Put both containers on the same network and check that the name you are using is working.

great work really. I was up and running in less than 45 mins..
The natural question poping up into my mind: why don’t we have the SAPGui (windows)ported to docker, now that Microsoft pretends to be a full docker player ?
Funny isn’t it ?
But to start with this topic, we have https://github.com/thalesvb/docker-platingui where you will have to supplement your own version of SAPGUI for Linux (not Mac) because the one available in the NW751 developer package is exclusively for Mac and Windows; and even if the Mac version is similar, it is slightly different and I couldn’t tweak it to have it work for Linux.

Again, great job and many thanks,

I am elaborating a little more with the nwabap751 docker image. But there is one major flaw in Docker architecture, if unioning of data layers is done inside the container. In between the below described snapshots,
1.we first installed the instance vhcalnplci, then created one abap, activated some sflighs demo.
Then commited the container, resulting size from 15.6 GB to 65.7 GB
2.created another abap and filled tvarv tables with some sizeless values. Commit will result in 111GB, therefore we tag the image and got rid of previous 65.7GB image.
docker history shows us that data snapshots have been layered inside the same image.

This is a n important topic when dealing Statefull container and Docker community it-self, has suggested various efforts, for example http://jasonwilder.com/blog/2014/08/19/squashing-docker-images/ or https://github.com/moby/moby/issues/332.

Finally, https://thenewstack.io/methods-dealing-container-storage/ explains some of the solutions.
As a quick developer work-around, we should isolate ASE database files outside of the container I guest.

Thanks for your pioneering effort along with Gregor.

Yes, NW on Docker is not production ready. You just cannot take 15 year old program and put it on Docker and say: not it’s modern architecture. NW is heavy, it’s big, it’s not available by a package manager like yum or apt.

The image is not optimized for NW too: no volumes, DB not separated. But to some degree it depends on what SAP provides. The dev edition installs all in one location. Good thing: this makes it easier to start.

As per SAP note 1122387, Docker containers are not officially supported by SAP.
I thought this would come handy for someone actually interested in using Docker for SAP products.

Yes, SAP is not supporting Docker. But the NW Dev version used is not available for productive use. It’S a developer edition, and it comes handy to be able to start a NW version automatically on a laptop.

Putting a real S4 or Business Suite in Docker, would be nice, but won’t meet the Docker use case.

I have a question. A normal developer AS Trial needs about 60GB of disk space. How is it possible, that your docker image only needs 20GB? I really don´t understand, what happens there.

And my second question is, if it is possible to shrink the size of a regular developer-VM the same way.

Hi Andreas,
The image is created contains only the openSuse OS and the copied NetWeaver files. The installation runs within a docker container, which is about 65 GB. If you enter “docker system df”: this will list all space used by docker for images and containers.
Regards,
George

Hi Tobias,
Thanks for your effort. i successfully installed NW on docker. After the installation was complete and i configured the system according to my needs I wanted to try backup and recovery of the my Netweaver. I commited my container creating a new image. When i build the new image and run the new container, the database fails to start and accordingly the dispatcher status is grey. Did you observe such behavior as well?
Best regards,
George

Hello Tobias, please excuse my naive questions. Aren’t docker containers stateless instances that are completely lost when the instance is stopped? Would ‘t be a vagrant file more usefull?

Thanks for a short answer,
Patrick

containers are not completely stateless, the data you write in there will survive a start/stop. The data won’t survive when you start each time a new container from the image.

Hi Tobias,
I’ve tried to execute the steps as you described, but it stops at buiding the docker image for AS ABAP 7.52 in step 7/15.
the las text show in console is:

Could you help me?
I’m trying to build the image in a Win10 laptop

I guess it is sufficient to have the NW752 folder in the same directory as the Dockerfile when starting the build.

I do not have a Windows Computer, so I won’t be able to test it. Have to looked into Dockerfile documentation for copy? https://docs.docker.com/engine/reference/builder/#copy

Hi everybody, I just did all the steps but my docker says its not able to find install.sh Any trick ?

when you cmd into Docker and do a ls, what do you see? When you copy the NW installation files, did you uncompress them before? Is a install.sh file in your local directory where you start the docker build command?

I have the following issue, can you help me, please?

Fabulous, what a website it is! This weblog gives valuable data to us, keep
it up.

If some one needs expert view regarding running a blog afterward i recommend him/her to go to
see this blog, Keep up the pleasant job.

11 min readIn this post I will explain how to access SAP Learning Hub (LH) training material PDFs that are not part of your subscription. You’ll need to have a valid LH solution subscription to Read more…