My internet provider is Unitymedia. Their default router comes with a DHCP server. Honestly, it’s one of the worst products I ever had to work with. My private network is 192.168.0.x. The DHCP server of the Unitymedia box is distributing from time to time leases for 192.168.192.x. Changing my private network to 192.168.192.x one is not working, as then the DHCP server picks another address range. Advise from Unitymedia help desk was to reboot the box, which, of course, won’t solve the problem. Because of this error, some of my devices are in a different network: Chromecast won’t work, broken internet connection on smartphones, etc.

I do have a Raspberry Pi (RP) in 24/7 use. My idea is to run my own DHCP server on the RP. This not only solves the DHCP problem, but also gives me more control over the DHCP configuration. 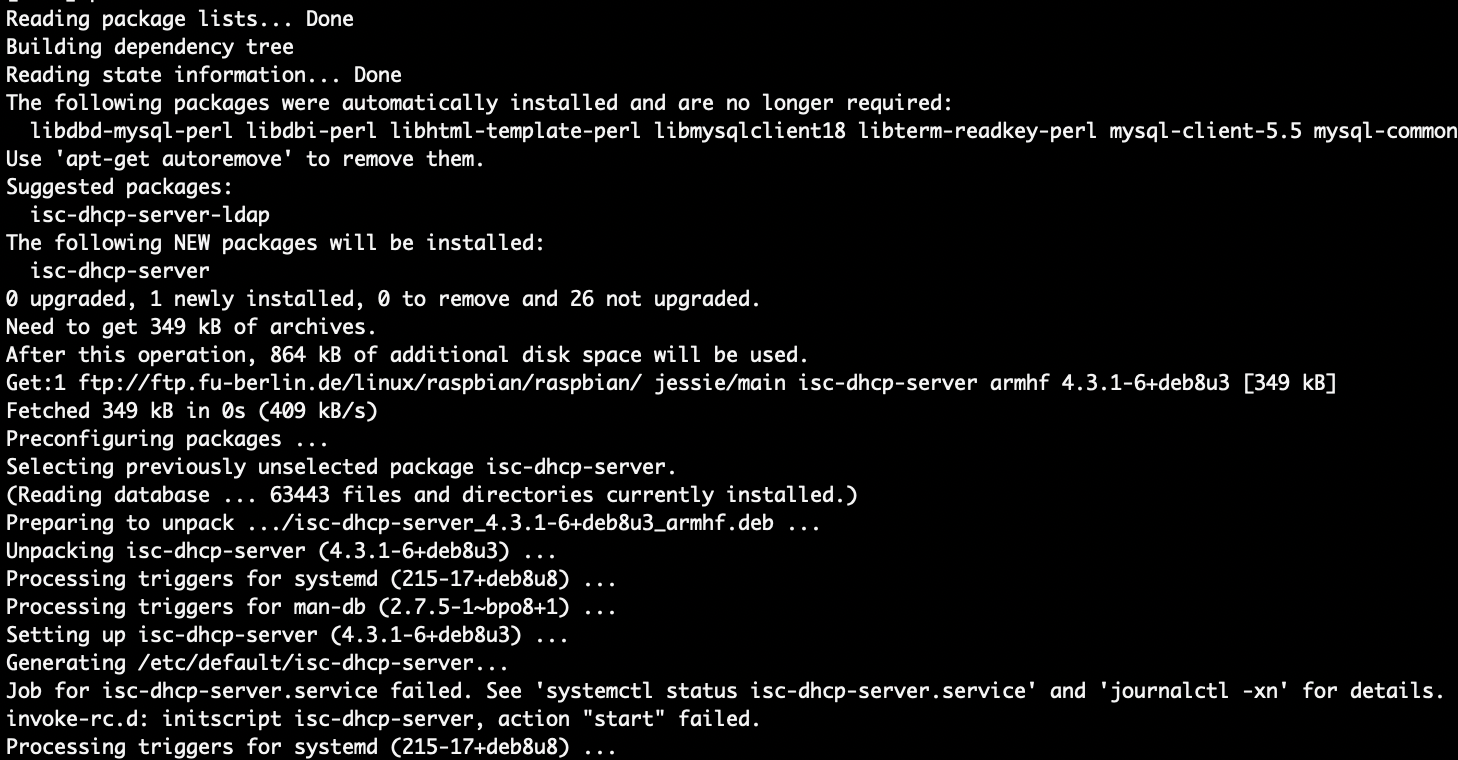 This installs ISC DHCP server. As you can see in the output, starting the DHCP server failed.

The error is simply caused because the DHCP server is not configured. Let’s change that.

Several parameters must be activated and configured.

This configures what IP address are going to be distributed. My private network is 192.168.0.x with the router on 192.168.0.1. As DNS you can use whatever you want, as an example I am using Google DNS servers.

This will give DHCP clients an IP address between .150 and .240, with router .1, Google DNS and sets the domain name to my own.

To not have the DHCP server provided by Unitymedia box still issuing wrong IP address, I am going to deactivate the service via the web interface.

To see if a IP address is assigned, use this command:

Putting my Android device into flight mode and back makes it connect to Wifi again and obtain a new IP address via DHCP. In the DHCP status log, I can see the DHCPDISCOVER from the Android device and that it got the IP address 192.168.0.150 assigned.

As my Mac always got the wrong IP assigned, I changed it to manual configuration. Change the mode to DHCP, apply and deactivate / activating Wifi.

And my soundbar that got a strange IP address assigned by the Unitymedia router box? Works too!

Chromcast streaming shows the SoundBar is now in the same network.

Thanks for the tutorial, just a comment: you have to declare the interface in the config file ‘/etc/default/isc-dhcp-server’, otherwise it won’t start. It took me an hour finding it out.

thanks for pointing this out. My my case, isc-dhcp-server contains INTERFACES=””. By default, ISC DHCP should listen on eth0. My RP also does have an additional network interface, wlan0, but that is not activated.

INTERFACES=””” didn’t work for me – I also had to put INTERFACES=”eth0″ into the file ‘/etc/default/isc-dhcp-server’ before it would work.

my RP has a static IP address. As the clients are discovering a DHCP server via broadcast, a fixed address should not be needed.

If you don’t have the luxury of having a domain name, what do you use instead?

the domain name is only user internally. You are free to use any domain name you like. It could be vine.com or myprivatedomain.org.

I’m slowly migrating off my Google Fiber server and this is one of the useful tools O still need to setup.

I also needed to run a dchp server on my raspberry and I used this article, but after I lost the ability to connect to raspberry via ssh

Same issue as kvas here. Nice tutorial but this is not working. The result of all this is:
– wlan0 no longer recognized
– eth0 down but can be put up with ifup

Maybe it was working with some older OS version…

If your wlon0 or eth0 devices are not working, you have to check why these are not activated. Are these the ones on the DHCP server? Or the ones of a DHCP client? If they are from the server, DHCP needs them to be up and running. You won DHCP server has a static IP. For the clients, you have to check the logs to see what goes wrong.

[…] setting up a DHCP server on a Raspberry Pi running Linux I get working leases for my clients. However, these are not static. It can happen […]