At the beginning of this year, I published a review on my blog activities in 2015. In 2016, I do not want to wait 12 month to give my readers an overview on how my private blog is doing. I thought on sharing each quarter a short review, but as now it`s already end of Abril, I guess you can see that plans are there to be adjusted. 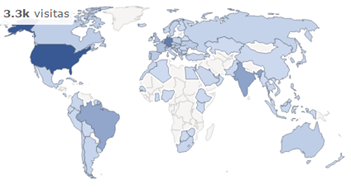 In January I installed elasticsearch and logstash to be able to run some analytical reports on the apache 2 logs. Amazing what you can run on a RP2 with just 1 GB RAM.

When I started my site, I decided to use a local server, running on Raspberry Pi. Not only because it’s cool, its cost efficient, I can control it / have absolute power and can run whatever other software on top of it (Subsonic, GateOne, git, etc). My site gained enough popularity that my internet provider decided that I run or am affected by a bot net, and stopped blocking port 443 last month. While this is not nice, I accept that having people from around the world accessing my site may look strange. Nevertheless, contract says they can, so I decided to put an AWS nano instance as a reverse proxy in front of my site. Yes, www.itsfullofstars.de is not anymore pointing directly to my Raspberry Pi 2, it`s going to AWS. In the end, you still end up in my living room.

Thanks to Olympic Games, I am suffering on constant power outages, as the city thinks that the population can be affected without problems, so they can host some test games for the IOC. This means that I am not always online, and my site is offline. Not sure what are the benefits of hosting Olympic Games, but if you think that in 2016 a stable power of internet connection is one of them, it`s not. At least a few million dollar a spent for sport stadiums.

5 min read2021 is six month old. I’ll take this as a reason to look back at the year and how my website itsfullofstars.de performed. So far, very well. The pure access statistics are not Read more…